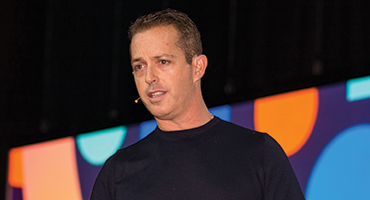 It’s never too late to author your own life.

Learning how to author your own life isn’t easy — for anyone.

Brett Kaufman, CEO of Kaufman Development, shared his story, including his self-improvement journey, at the Columbus Chamber of Commerce annual meeting — whose theme was Level Up — in early February.

“Before we can start leveling up, we’ve got to go back and really look at who we are at our core,” he said. “I’ve spent a lot of time in therapy and coaching, looking at that, so that I could create from that place, my highest and best self.”

Trying to be enough

Kaufman’s grandfather grew up poor. As he became successful, he gave his kids everything he never had — clothes, travel, schools, cars — and Kaufman’s father was programmed that that stuff mattered most.

“These things didn’t fill him up and instead left him empty; it left him with a void, a void he would fill with alcohol, with work, with sex, anything to fill him up,” he said. “That led to addiction, to abuse, to affairs, and ultimately bankruptcy, and later in life, even jail.”

Kaufman felt squashed by his father’s lessons. He needed to be more — to sit up straight, look people in the eye, shake their hands, be tough, be a man and have good manners.

Eventually, his parents divorced, and Kaufman moved to Columbus. Although he was excited to start over, he hid from his insecurities and fears with bad behavior.

Over time, though, moments woke him up. Moments like seeing creativity in his high school art room, finding community at Grateful Dead concerts, or experiencing flashes of insight in his college classes. But the biggest moment of all was meeting his future wife, knowing instantly she was the one for him.

“I needed to do whatever it would take for her to marry me, to impress her parents, to be enough,” he said. “So, I graduated from college as fast as I could. I didn’t do the things that I had dreamed about, go to Europe or go back to architecture school. I did what every good Jewish boy was programmed to do — I got a job at a bank.”

Worried people would realize he was a lousy banker, Kaufman eventually took a job with a multigenerational family business, where he learned from amazing people. He also learned from coaches like Chet Scott, of Built to Lead.

“He taught me what it meant to have a worldview, to have beliefs, to have an identity, a purpose, and that maybe I could love my life, my work. They could be one,” he said.

Landmark Worldwide’s Forum helped Kaufman define his goals. He wanted to be compassionate, present, courageous, confident and the author of his own life.

At Summit Series, he met thousands of people who were already authoring their own lives, inspiring Kaufman to start Kaufman Development. He wanted to build communities that are beautiful from the inside out.

This led to Gravity, which helps its residents improve their well-being and impact — like Kaufman learned to do — through events, podcasts and more.

He knows he’s a work in progress — just ask his therapist — but sees the need to continue to invest in people.

Everybody has a story that they control.

“It’s never too late to author your own life,” Kaufman said. “This community needs you to do that. Your families need you to. Your businesses need you to, and most importantly, you need to.”