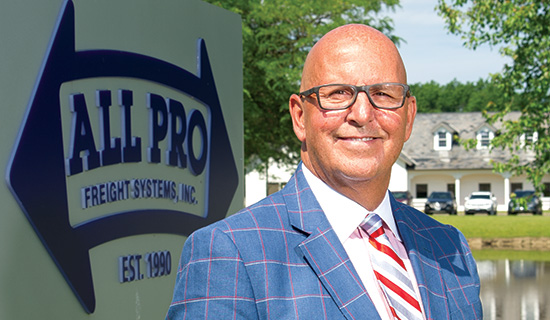 As one of seven children growing up in a blue-collar family in Lakewood, Chris Haas has always been well-acquainted with the value of a hard day’s work. The Midwestern work ethic was ingrained in him by his father, and Haas has applied those lessons at pivotal moments — such as the time early in his career when he was paired with a trainer whose commitment to the job fell a bit short.

Haas paid his own way for his freshman year at Kent State University, but forces were pulling him toward becoming an entrepreneur. After working for four transportation companies, he decided it was time to step out on his own, and he borrowed $500 from his mother to begin All Pro Freight Systems Inc. The company began as a one-man freight brokerage business that he operated out of the basement of his starter home.

“I’d do the operations in the morning and make sales calls in the afternoon, and it grew from there,” says Haas, the company’s founder, chairman and CEO. “I’m a very competitive person. I’d see a truck in somebody’s dock, and I’d want that business. I couldn’t just sit still. In today’s day and age, it’s all internet-based, and I still don’t play that game. When I talk about building relationships, you can’t do it over the internet. I’m sorry. You just can’t.”

All Pro Freight is now a full-service transportation needs supplier offering local, regional and long-haul trucking, as well as warehousing facilities and storage trailer rental. In 2016, Haas relocated his company to the former Bonne Bell plant on Crocker Road in Westlake.

“You couldn’t find a better spot for what we do,” Haas says.

One of the early challenges for Haas in building his company was constructing a team and a system that could consistently deliver for his clients.

“You have to make sure you have the assets, whether you’re in the manufacturing or service industry,” Haas says. “You’ve got to make sure you can keep up. With the brokerage business, we had access to 10,000 different carriers around the country that we could tap into. But now you’re relying a lot on other people. I always tell people, if you pick it up on time, deliver it on time and charge what you say, the client doesn’t care whose name is on the truck. But the minute you miss a load or you’re late to pick it up, they don’t want a broker. They want to see All Pro.”

Haas began to develop his own fleet of trucks, which now numbers more than 400 vehicles, to back up the brokerage side of the business. He did it partially to bring things in house, but also to protect against a projected shortage of truck drivers nationwide.

“Early on, we were probably 75 percent brokerage and 25 percent company fleet,” Haas says. “Now, due to the driver shortage, we’re probably 60 percent fleet and 40 percent brokerage. When I was out there building those relationships — whatever the customer needed, we would do it — that’s how we got into the warehouse business.”

All Pro Freight now has more 1 million square feet of warehousing space that helps protect the company against market and industry changes.

When it comes to pricing, Haas says it’s an ongoing challenge to balance the needs of customers against those of the business. He says All Pro Freight will never be the lowest-priced choice in the transportation industry, but he would prefer not to have the highest prices, either. Fuel is a key variable in this effort, as well as insurance costs and the aforementioned driver shortage.

“It costs so much money now to qualify a driver, that’s not something you can put in a surcharge to the customer,” Haas says. “So we’ve got to make sure that we stay profitable and competitive. At the end of the day, if you’re not making money, you’re out of business.”

Dealmaking has also played a part in All Pro Freight’s growth.

“Especially in a down economy, you realize that growth by acquisition is probably a good thing,” he says.

Several years ago, Haas started talking to companies in his industry with owners who were getting older.

“I looked at these guys in their late 60s, early 70s, and I thought that could be me in 30 years,” Haas says. “What am I going to have? What do I need to establish myself 20 or 30 years down the road? An acquisition would work great because we were bigger than they were, and we could take their account base over. Because of their size, they could only do X amount of business. Because of our size we could double that.”

He says the owners of those company could be paid out on a royalty basis of the course of three or four years.

“So I did it with the first company, and then about a year and a half or two years later, I found another one,” he says. “It was kind of the same situation age-wise, and so I approached that guy and it worked, so we did another acquisition. We’re always keeping our eye out for potential deals.”

Add in a couple more deals, and Haas counts four acquisitions made by All Pro Freight in the past 20 years.

“We get contacted every couple months with a trucking business that is in distress,” Haas says. “They’re failing, and they want to be acquired. You’ve got to determine between, do we want to go and figure out what ghosts they have in the closet? Or do we just want to wait until they’re done and go secure their business directly?”

Haas spoke about the risk of making a bad deal in a story last year for Smart Business Dealmakers.

“Sometimes the best deal is the one you don’t make,” Haas said in the January 2018 story. “So many people let their ego get in the way — they want this, they want that — and if things don’t line up, they try to force it and it creates a lot of problems. Our acquisitions are good for both sides, long term, and that makes everybody happy.”

One deal that has worked out quite well for Haas and All Pro Freight is the move from Avon into the old Bonne Bell facility in Westlake.

Bonne Bell was a cosmetics company founded in Lakewood in 1927. It opened a manufacturing and warehouse facility in Westlake in 1976, and in 2015, the Bonne Bell and Lip Smacker brands were acquired by Mawkins International Corp., leading Bonne Bell to close its Westlake operations.

“It was slightly dated, to say the least,” Haas says. “Obviously, as they were winding down and preparing to do whatever they did as far as a sale, they weren’t putting much money into it. So we came in and did a $1.5 million renovation.”

The building has numerous conference rooms and easy access to the vast warehousing space that the company needs to move and store freight.

Counting drivers, All Pro Freight has about 400 employees and is close to $60 million in annual revenue.

“We have a storage trailer division, a local cartage division and an over-the-road truckload division,” Haas says. “We have a warehousing division and we do pack-and-pick services. Whatever the customer wants that relates to our space, that’s how we’ve grown the company.”

After nearly 30 years in business, Haas is as energized as ever to keep his company moving forward.

“My CPA is always like, ‘You don’t have to worry this month,’ or, ‘It took 30 years to build it. You’re not going to lose it in three months,’” Haas says. “I’m like, ‘Well, I want to know every month what we’re doing. I need to sleep good at night.’”

Haas on early personnel struggles: You need to have good operations people and good inside people that allow you to be out there building relationships and growing the business. I did have a lot of good people, but others, I stayed with them longer than I should have. While I was out there beating down the bushes for opportunities, they were on a free ride in the office. Some people quit, and they just don’t leave the building. They take advantage of the fact that you’re not keeping as close an eye on things.

Haas on culture and entertainment: Entertainment dollars are big in our company. We’re a suite holder at Rocket Mortgage FieldHouse and with the Browns. We like to spend money on sporting events because it gives us quality time to bring people together. We also had our name on the ballpark in Avon, and that was great for the 170,000 people driving by it every day. But everybody that goes to a game doesn’t use a transportation company, so it was more about the location and because I’m a big community guy.

If you can improve the quality of life, then I think it’s good for everybody. I operate my company that way. My dad was a blue-collar laborer and never saw us play any baseball, basketball, any sports growing up. I have four daughters that were all in dance and athletics. I’m big on my employees not missing their daughter’s ballet recital or T-ball championship game. That speaks volumes for keeping your employees happy and keeping them long term. It’s a relationship that we’ve built over the years.