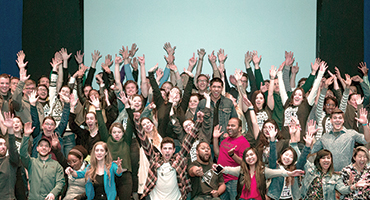 We saw this opportunity to bridge the gap between technology and impact, but to also leverage best practices to make sure that what we’re building and creating solves a real problem and addresses real need within communities.
Suzy Bureau
Founder, GiveBackHack

Suzy Bureau founded GiveBackHack in 2015 as a launchpad for social innovation. She and other weekend warriors, who had other jobs, wanted to help people turn ideas into reality.

By bringing people together, they felt they could create solutions with lasting impact, utilizing a framework of design thinking, lean startup principles and product management best practices.

“We saw this opportunity to bridge the gap between technology and impact, but to also leverage best practices to make sure that what we’re building and creating solves a real problem and addresses real need within communities,” Bureau says.

The first event, started in Columbus, is held each year in April. But as word spread and participants from other cities attended, GiveBackHack added events in Cleveland, Baltimore, Philadelphia and Thailand.

Bureau says Central Ohio is far along in its social enterprise journey, compared to other cities that don’t have the same support and resources, so GiveBackHack’s approach has to be different in different communities.

“We work with organizers who are on the ground in those cities to really be the leaders of the event — to identify who all the stakeholders are — so that we can partner with them and then figure out what is the best way for us to provide value,” she says.

The organization, which also consults with social enterprise and workshops, is truly a labor of love for Bureau, who has never taken a salary or been paid for what she does with GiveBackHack.

Over the years, GiveBackHack has had several success stories. Stories like Wild Tiger Tees, a Columbus screen printing and design shop that employs youth from Star House, a drop-in center for those experiencing homelessness, to print its products. And Bonifier, which wants to eliminate fear and anxiety for children experiencing serious illness through an artificial intelligence-based companion, where the chat-bot can help track how children feel over time.

In addition, Bureau says GiveBackHack uses the same framework it teaches about solving problems to assess its own methods. At first, the platform only served brand-new ideas, but in its third year, it opened that up to partially vetted ideas.

“That was really a game changer for us because the big gap in the market was figuring out how to bridge the gap between ‘I have this idea’ and ‘I don’t know what the next steps are,’” Bureau says.

Through its events in several cities, GiveBackHack has helped more than 1,000 participants from over 20 countries. More than 500 ideas have been created or pitched during its events, and over 120 social impact ventures have been vetted and prototyped. In addition, more than $100,000 in early stage seed capital has been awarded to teams to help them move forward.