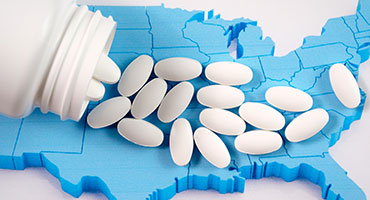 As the number of opioid overdoses soars, labor market participation has fallen. Federal Reserve Bank of Cleveland economists wanted to determine whether the trends are connected.

“Drug overdose deaths are now the leading cause of death for Americans under 50, so it’s an enormous issue to be thinking about as it relates to the economy,” says Kyle Fee, senior policy analyst of community development with the bank. “Arguably our district is at the center of this crisis.”

The Federal Reserve Bank of Cleveland covers Ohio, western Pennsylvania, eastern Kentucky and the northern panhandle of West Virginia. That area was prescribing a disproportionate amount of prescription opioids from 2006 to 2016. Some areas — broken into chunks of 100,000 or more to keep from overly identifying people — were prescribing two to four prescriptions per year for every person, which Fee says is a frightening statistic.

Accounting for the Great Recession and poor long-run labor performance, which don’t appear to have boosted use, Senior Vice President Mark Schweitzer says when opioid prescriptions increased 10 percent, it had a tendency to lower the employment population rate for men ages 24 to 54 a half of a percentage point.

If an area’s prescription rates spiked 100 percent, which many did, that number in prime age men becomes 5 percentage points, he says.

The effect was lower for women, he says. Women with bachelor’s degrees actually had greater labor force participation and employment rates when in a higher prescription opioid county.

The effect was largest for men — white or minority — with education levels of high school or less. “Bachelor’s degrees seem to be a protective element,” he says.

Minority communities have been less exposed to prescription opioids, so they generally fared better, but when they were exposed, the response was a little higher.

“One of the things that we have to be cautious about in our analysis is we don’t have a measure for how many illegal opioids are in places,” Schweitzer adds. “We do actually see in our recent employment data that prime age men and women have been gradually bumping up their labor force participation rate, and this lower level of opioid prescriptions certainly is consistent with that outcome. But we can’t cover anything about the illegal opioids.”

“We’ve heard that they can’t find workers. And if they can find workers, employers are encountering situations where their employees have to take time off, miss work, etc., to work with family members who may be struggling the disease,” he says.

While the economists measured employment outcomes from 2006 to 2016, Schweitzer says the long-term effects will likely continue because when people leave the labor market, they are much less likely to re-enter.