CUPERTINO, Calif., Tue Jul 2, 2013 — Apple Inc. said it plans to build a new solar farm with NV Energy Inc. for power supply to its new data center in Reno, Nevada, a major step towards its goal of having its data centers run on renewable energy.

Apple and other technology companies such as Amazon.com Inc. and Microsoft Corp, that build and run computer server farms have come under criticism for their high consumption of electricity and other resources.

These data centers cater to an explosion in Internet traffic, streaming content through mobile devices and hosting of services to corporations.

The new solar farm will provide power to Sierra Pacific Power Co.’s electric grid that serves Apple’s data center and when completed will generate about hours 43.5 million kilowatt of clean energy a year, Apple said in a statement.

DETROIT, Tue Jul 2, 2013 — Hyundai Motor Co. is recalling about 5,200 Azera sedans in the United States to address an issue where the airbag may deploy with less or greater force than needed in an accident.

The South Korean automaker is recalling the 2012 and 2013 model-year cars because the occupant detection system may fail to properly differentiate whether the front-seat passenger occupant is an adult, child or a child restraint seat, according to documents filed with the U.S. National Highway Traffic Safety Administration. The result could be the bags deploying with the incorrect force and that could lead to increased risk of injury.

Hyundai determined that a change in the fabric material on the sensor mat could impact the sensor’s ability to properly classify an occupant, NHTSA said.

A review of warranty claims found several instances indicating that the airbag warning light had illuminated with a diagnostic code for a wet seat, according to NHTSA.

CINCINNATI, Thu Jun 6, 2013 — Procter & Gamble Co. , the world’s largest household products maker, has announced a reorganization amid speculation by analysts that the heads of its new units are in the running to replace CEO A.G. Lafley.

The maker of Tide laundry detergent and Gillette razors brought back Lafley as chief executive in May, as it came under pressure from investors to pick up the pace of improvements.

In an expected move, the company will split its household care and beauty and grooming units into four sectors starting July 1: Global Baby, Feminine and Family Care; Global Beauty; Global Health and Grooming; and Global Fabric and Home Care.

“We expect this structure to facilitate faster global expansion of brand and product innovations to win with customers,” Lafley said in a statement.

“The individuals who are reporting directly to Lafley are obviously potential candidates to be named to the top spot,” said Morningstar analyst Erin Lash, adding that she expects Lafley to be a caretaker CEO.

Martin Riant, Deborah Henretta, David Taylor and Giovanni Ciserani will lead the units as group presidents. They are assuming additional duties with the change, and will report directly to Lafley.

The company also said that Charles Pierce will assume responsibilities for New Business Creation and Innovation from Jorge Mesquita, who is leaving the company. Pierce will report to Lafley in that additional role.

“I think there will be more changes to come, too. This is really only a signal of who the successors are,” Sanford Bernstein analyst Ali Dibadj said.

What business owner doesn’t want to be profitable? Properly executed accounting not only allows you to maintain your current business, but it also can increase profitability and identify growth areas. Michelle Mahle, director of tax at SS&G, shares some advice on how accounting can make a difference.

Q. What accounting missteps might lead to decreased profitability?

A. Financial statements are a powerful resource for business owners. Knowing what information to capture, and to what level of detail, is key to making solid business decisions. Ensure that your chart of accounts suits your business and accounting needs.

Q. How can accounting help identify areas for growth?

A. Accounting, done properly, will allow you to project future results as well as report historical activity. Business forecasts can help identify opportunities for business owners to refocus, reallocate, dedicate or even restrict resources to achieve different results.

Q. What do businesses commonly overlook that can pose problems?

A. Scrutinizing expenses will improve your bottom line. However, focusing too much on your bottom line can be counterproductive. If you aren’t finding a way to maintain or increase revenues, it doesn’t matter how much you spend because, eventually, anything will be too much.

SAN FRANCISCO, Mon Oct 29, 2012 – PayPal is cutting about 325 jobs as part of a major reorganization by its new president, David Marcus, designed to regain an innovative edge and head off rising competition.

PayPal, the online payment pioneer owned by eBay Inc., said on Monday the full-time jobs would be eliminated as it combines nine product-development groups into one. The company is also cutting about 120 contractors.

EBay announced a $15 million pre-tax restructuring charge, to be recorded in its fourth quarter, related to the job reductions.

PayPal, which started in the late 1990s as a scrappy Silicon Valley start-up, had almost 13,000 employees earlier this year.

“In a large company, at some point you reach the law of diminishing returns when more people means slower,” said Marcus, who used to run mobile payments start-up Zong, which PayPal acquired last year.

“You have a lot of duplication of roles with nine product groups merging into one,” he said.

Wall Street considers PayPal the crown jewel of eBay because it is growing fast and profit margins are expanding. But in Silicon Valley, PayPal is considered a slow, bureaucratic behemoth – a reputation that has made it difficult for the company to attract and retain smart software engineers and designers.

PayPal needs such talent more than ever because a slew of payments start-ups, including Square, Stripe and Dwolla, are developing rival services and products that are beginning to catch on with merchants and consumers.

“PayPal has been on a very strong growth trajectory, but it’s facing a period of disruption ahead,” said Kevin Hartz, chief executive of ticketing start-up Eventbrite.

“We just haven’t seen a lot of innovation that’s needed for them to continue their leadership,” added Hartz, who was an early investor in PayPal and owns a small stake in Square now.

Marcus said he is reorganizing PayPal to help engineers and designers develop new products and services more quickly, to keep up with new rivals.

WOODCLIFF LAKE, N.J., Mon Oct 29, 2012 – Bayerische Motoren Werke AG’s BMW of North America affiliate said it will recall 45,500 of its 7 Series luxury sedans from model years 2005-2008 to correct a flaw that could cause a parked vehicle to roll away.

BMW last week recalled many of the same 7 Series sedans, saying the doors may not latch due to a software problem on cars equipped with both Comfort Access and Soft Close Automatic options. 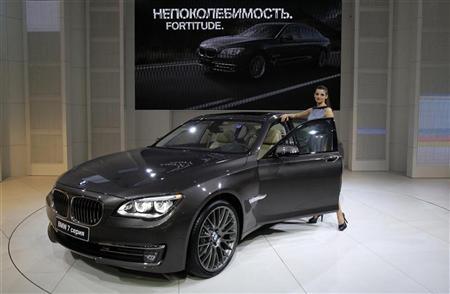 (Reuters) – Bayerische Motoren Werke AG’s BMW of North America affiliate said it will recall 45,500 of its 7 Series luxury sedans from model years 2005-2008 to correct a flaw that could cause a parked vehicle to roll away.

BMW last week recalled many of the same 7 Series sedans, saying the doors may not latch due to a software problem on cars equipped with both Comfort Access and Soft Close Automatic options

WASHINGTON, Mon Oct 29, 2012 – Consumer spending rose solidly in September as households stepped up purchases on automobiles and a range of other goods, setting up a firmer base for consumption this quarter.

Economists polled by Reuters had expected spending, which accounts for about 70 percent of U.S. economic activity to increase 0.6 percent in September.

NEW YORK, Mon Oct 29, 2012 –  Hurricane Sandy will likely cause financial headaches for U.S. airlines that canceled more than 7,000 flights to and from the Northeast corridor on Sunday.

Airlines started cancelling flights in the U.S. Northeast region Sunday evening as cities from Washington D.C. to Boston braced for floods and high winds from the hurricane, which was expected to make landfall in the next few days.

According to Flightaware.com, more than 7,100 flights had been canceled by 9 p.m. on Sunday due to Sandy. Airlines waived fees for people who have to change travel plans because of the grounded flights.

In New York City, the timing of flight cancellations like US Airways, was determined by the city’s decision to start shutting down its mass transit systems at 7 p.m. as passengers would have no way to get to and from the airport.

U.S. Airways said it would likely have to cancel close to 2,000 flights because of the storm, starting at 7 p.m. Sunday. The airline said it expects to resume flights on Tuesday, but noted that flooding and the storm’s duration could cause additional delays.

The airline also said it would move planes from the hurricane zone to try to avoid damage. Repositioning those planes after the weather clears could cause additional delays.

Transportation consultant George Hamlin estimated that Sandy could cost the industry hundreds of millions of dollars.

WASHINGTON, Mon Oct 29, 2012 – The last employment report before the U.S. presidential election is likely to have something for everyone – for those bullish and bearish on the economy and for Barack Obama and Mitt Romney.

Non-farm payrolls in October are forecast to have risen 124,000, barely more than September’s 114,000 gain, according to 78 economists polled by Reuters. The unemployment rate probably edged back up to 7.9 percent after falling to 7.8 percent from 8.1 percent last month. The figures are due on Friday.

On the face of it, that would reinforce the charge leveled by Romney, a Republican, that the policies of his Democratic opponent are to blame for the slowest post-recession recovery since the war.

The proportion of America’s working-age population that is employed has fallen to 58.7 percent from 60.6 percent when the Democrat took office in January 2009.

But Obama can counter that nearly 800,000 more Americans are in work today than when he became president and that five million jobs have been created since the December 2009 trough, according to the Bureau for Labor Statistics.

CHICAGO, Wed Oct 24, 2012 – Boeing Co. posted stronger-than-expected results for the third quarter on Wednesday and raised its forecast for the full year, as its defense business improved and commercial aircraft deliveries surged.

Analysts surveyed by Thomson Reuters I/B/E/S had expected Boeing to post earnings per share of $1.13 for the quarter that ended Sept. 30.

“They were obviously strong in defense, which is certainly good to see,” said Ken Herbert, an analyst at Imperial Capital LLC.

Defense revenue fell 4 percent $7.8 billion, compared with a year ago, but margins widened to 10.5 percent from 10 percent.

Those shifts reflected contraction of defense spending – a growing trend as the United States and Europe cut budgets – but also showed Boeing’s ability to be “very aggressive” in cutting costs, Herbert said. “They’re ahead of the curve compared with their peers.”